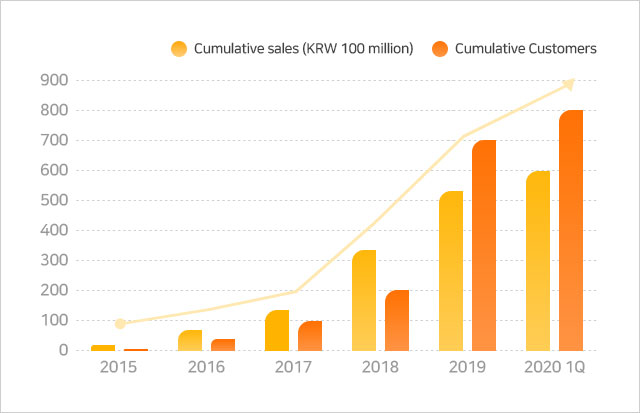 AIO&CO (DBA AFSMALL) announced that it has surpassed 60 billion won in cumulative sales in about 4 years and 6
months since the opening of the AFS MALL service in 2016 and achieved a surplus in the first quarter of 2020.

AFS MALL started beta service in January 2016, and has been targeting overseas buyers with sales through local
branches in China, Hong Kong and the United States.
Currently, through word-of-mouth, member companiesfrom various countries are steadily increasing, and more
than 800 buyers from 60 countries have been secured.

The cumulative number of products sold by AFS MALL is 5.45 million, and the repurchase rate based on orders more
than twice after membership is 78 percent. The largest buyer is Alibaba’s TMall Direct Purchasing Team (TDI), and
has online sellers from each country working on platforms such as Amazon and eBay as its member companies.

In addition to its overseas distribution network, AIO&CO. is also stepping up efforts to secure a domestic distribution
network. Its starting point is its own brand “Foklin,” launched in March this year, which will release about 10
products related to hygiene and cleanliness sequentially within the year. The company’s flagship product is a Foklin
band mask with MB filter built in and exported to five countries in less than two months after its launch, with
cumulative sales surpassing 300,000 pcs.

AIO&CO has also opened and operated a beta service since April, a local membership mall in response to the increasing
demand for the untact business. Discount coupons are shared through SNS, and members can meet products at
the lowest online price if they enter the coupon name when purchasing products.

Jun Jae-hoon, CEO of AIO&CO, said, “There were some projects that failed due to the COVID-19, but this crisis
gave us a step forward,” and added, “We will provide various distribution services based on the advanced IT
technology to domestic and overseas brands and distributors that will be confused by the entry of untact era.”